Let’s go 500,000 years back. You might have enjoyed reading history books and knowing about primitive society. You have watched numerous documentaries. What if you’re told to set up a thousand years old civilizations? Wouldn’t that be a great opportunity to explore the past? If you are thinking how; then let us introduce you, the Empire Earth Gold Edition. This is not just a simple construction game, this is the real past. You never get this golden chance every day right? So, what are you waiting for? Let’s go back to the age of stones and support mankind. Build up the greatest nations and be a part of this famous game franchise, Empire Earth.

The gamers, who enjoy strategy-based games; must be very excited after knowing about Empire Earth Gold Edition, you must know how to collect the reserves and turn the barren land into the most renowned empire. Begin your journey from the pre-historic age and let’s see how far you can go. The credit for lighting up the past goes to the developer of Empire Earth Gold Edition, Stainless Steel Studios. 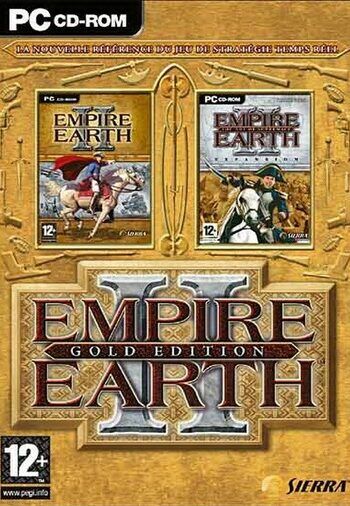 Sierra On-Line has published this gameplay and this game started ruling over the gaming market right after its release, November 2001. The Golden Edition is the combination of original Empire Earth and The Art of Conquest. This game has beautifully divided world history into 14 different periods and it ends with the modern sci-fi age; deal with complicated diplomacy just like the legendary leaders.

Channelize the manpower and use the armies to fight for your empire. Players have to build up the necessary units, like the buildings, airports, industries, palaces, museums. But all the units would be related to the age you are playing. There are different technologies; these can be used to improve distinct sectors – health, agriculture, economy, education, etc. You will be the king of past, present, and future in Empire Earth Gold Edition.

If you love to be creative, Empire Earth Gold Edition is the right platform for you. Let’s rise to power and lead a complete era. This game also has various interesting features which will amaze you. Let’s check them out:

Empire Earth Gold Edition has two distinct modes of gameplay – Standard, and Tournament. The Standard model is based on strategic empire-building games. The tournament mode is known for, RTS action. You can enjoy any of them at a time.

Enjoy the range of civilizations and you can choose any one of them – Korea, Germany, America, Egypt, Russia, Masai, etc. If not among them; then the players can create their civilization with respective economic and military units.

Empire Earth Gold Edition has multiple battle rounds; there will never be any shortage of action in this game. The players can participate in different combats on land, water, and air. You can participate in World Wars too. Use different weapons and military force to win them.

It’s time to rise to the power and make your kingdom the best among all. From discovering fire to sending a satellite into space; Empire Earth Gold Edition has got it all. Travel to different ages and enjoy the game. The screen looks lively with 3D visual effects and active gameplay. You can be the next king of Empire Earth Gold Edition. To all wanderers, who love to explore – it is the right time to start the journey.

ON WHICH PLATFORM I CAN PLAY EMPIRE EARTH GOLD EDITION?

You can play this game on Windows.

IS THIS GAME AVAILABLE FOR FREE?

No, Players have to purchase Empire Earth Gold Edition.

HOW MUCH STORAGE SPACE IS REQUIRED?